Topaz Sharpen AI Update Version 4.0 and just how good is it? Is it actually better? 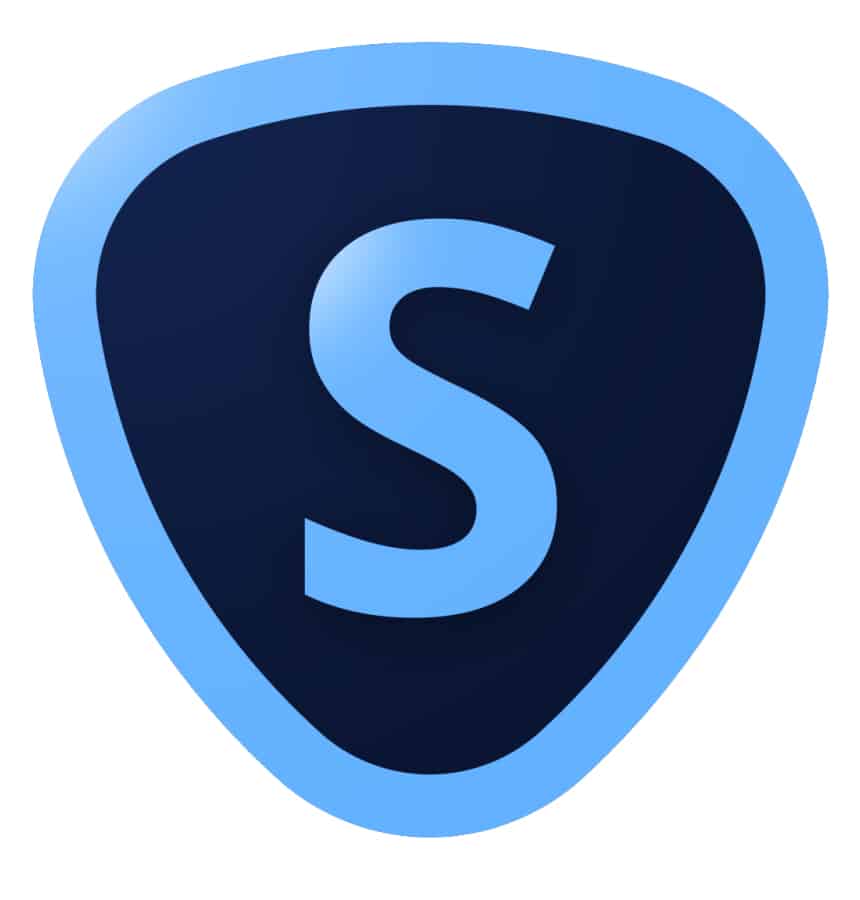 My main Topaz Sharpen AI review is here if you want to have a read of it.
Before we get into the Version 4.0 review… if you are thinking of upgrading to version 4.0 then feel free to use my Sharpen AI promo code below to save yourself some money on it.

Now I have tested and compared two versions side by side and I have found that Sharpen AI Version 4.0 has also improved the effects of Sharpen AI again. Not in the way you are expecting though….
Whats really cool about this update is not that it sharpens everything but it seems to distinguish a lot better now between blurred out backgrounds and your subjects.
This might seem like a slight improvement but for me there seems to have been a serious improvement in it’s AI abilities to decipher what should be in focus and what shouldn’t be.
Before we get into that lets talk about how you download the Version 4.0

If you are like me then the auto software update in the Sharpen AI app might not work, I also checked for the latest “Software Update” in the App which didn’t recognise the update. So I simply went to the Topaz Labs Website and downloaded it manually and of course that worked then. 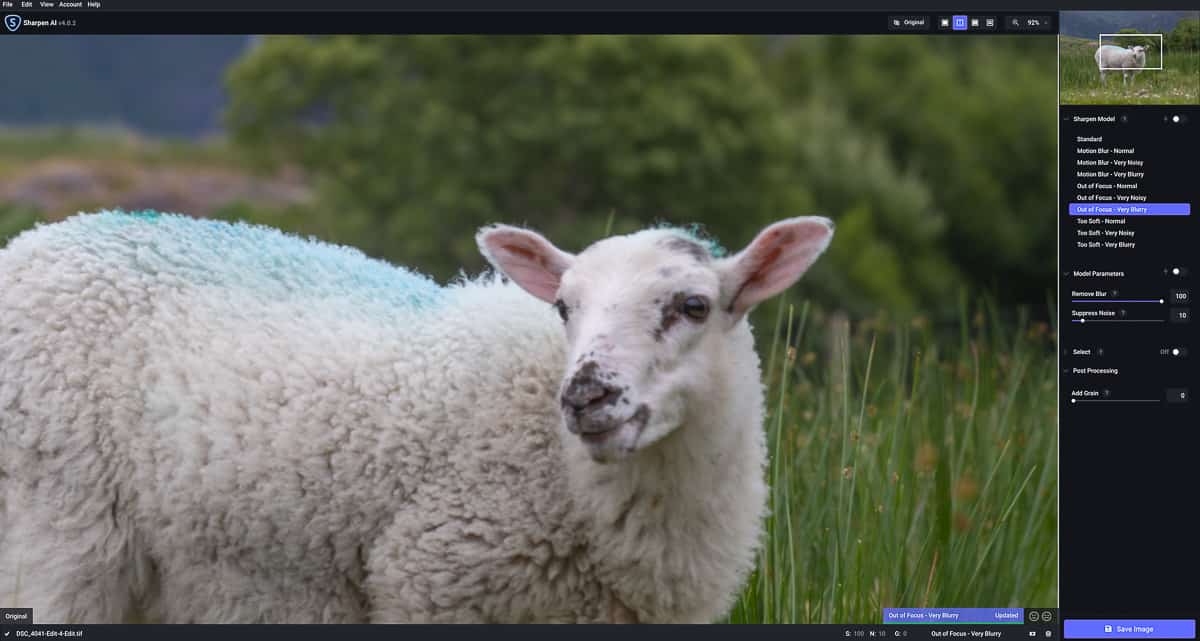 I go into a lot more detail on the editing and the photo itself in my full review here of Sharpen AI.

You can clearly see the eyes are out of focus, this would be a shot I would normally bin but I though why not try it in Sharpen AI. Now there were a few issues with it when I sharpened it.

In the “Out Of Focus” option with “Very Blurry” selected and with the “Remove Blur” slider manually adjusted I found this gave me amazing results on the sheep. The issue was the background which was out of focus purposefully was artificially sharpened and the edit just didn’t work then. In my video I go into a way around that though.

You can see the effect in the image below the area I am talking about is in the trees over the sheeps head. The blurred out tree became very digitised by the edit. 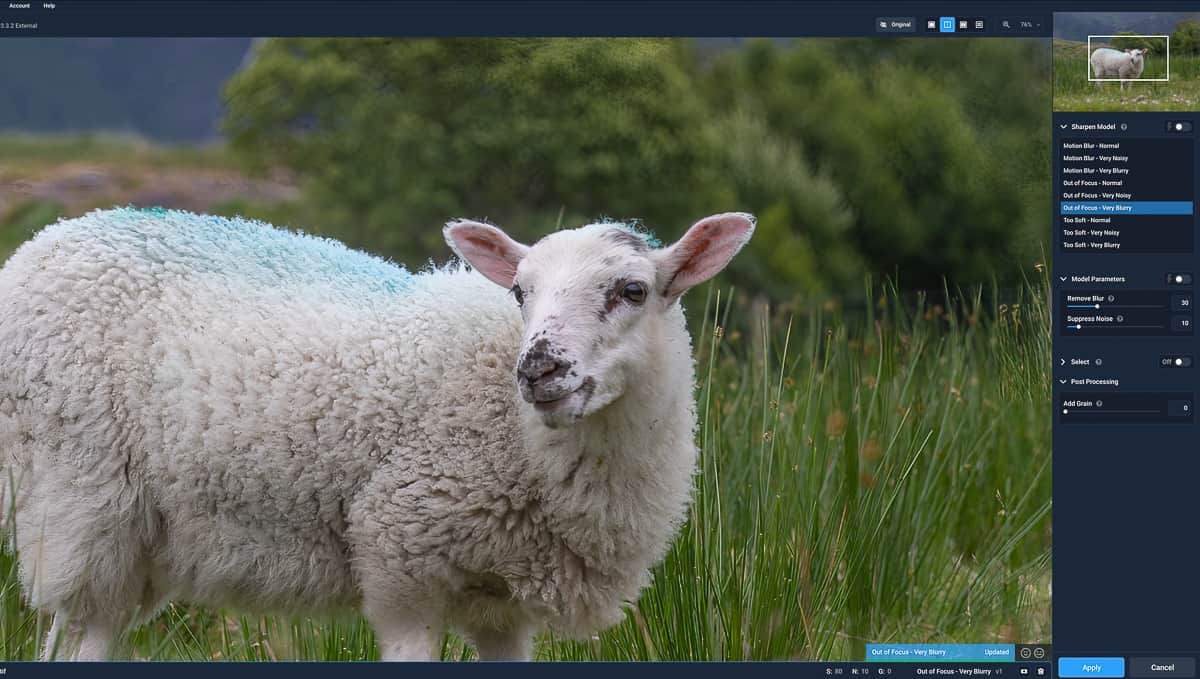 So I decided to try Sharpen AI Version 4.0 to see if there was any difference in the new version, honestly thinking there wouldn’t be.

So I popped it in and edited it in the same way and I was surprised to see the digital artifacts didn’t seem to be there and the sharpening effect on the sheep was as good as before in version 3.3.

So I decided to try a bit more “Remove Blur” and carefully slide the slider control up a notch, the results were a sharper image and still no artifacts.

So I went all out and set it too 100% and still not really there. Wow now that’s impressive and just look at that sheep it’s pin sharp now.

Now will it work for everything and in every situation? Probably not but it has worked in a few more shots I tried so it’s going in the right direction. 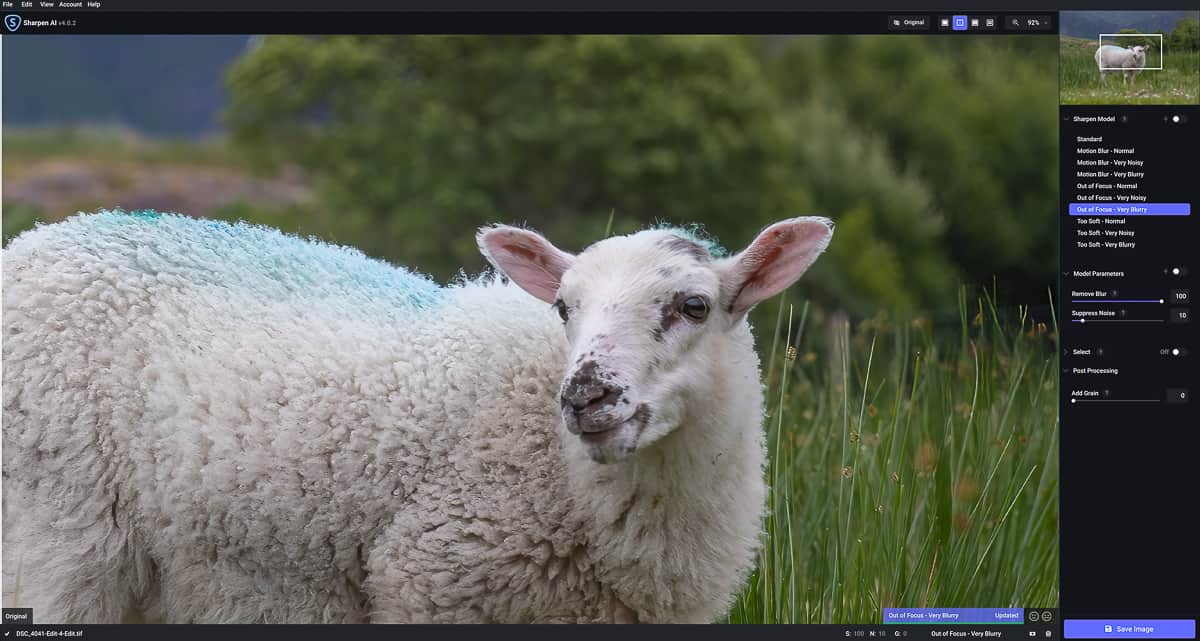 Sharpen AI was already incredible and with this slight advance it has just stepped ahead again now slightly.

Topaz Labs I am not sure how ye do it but keep doing what ye are doing and I am looking forward to what Sharpen AI Version 5.0 can do 🙂