Nikon Z6iii News and when will it be released? 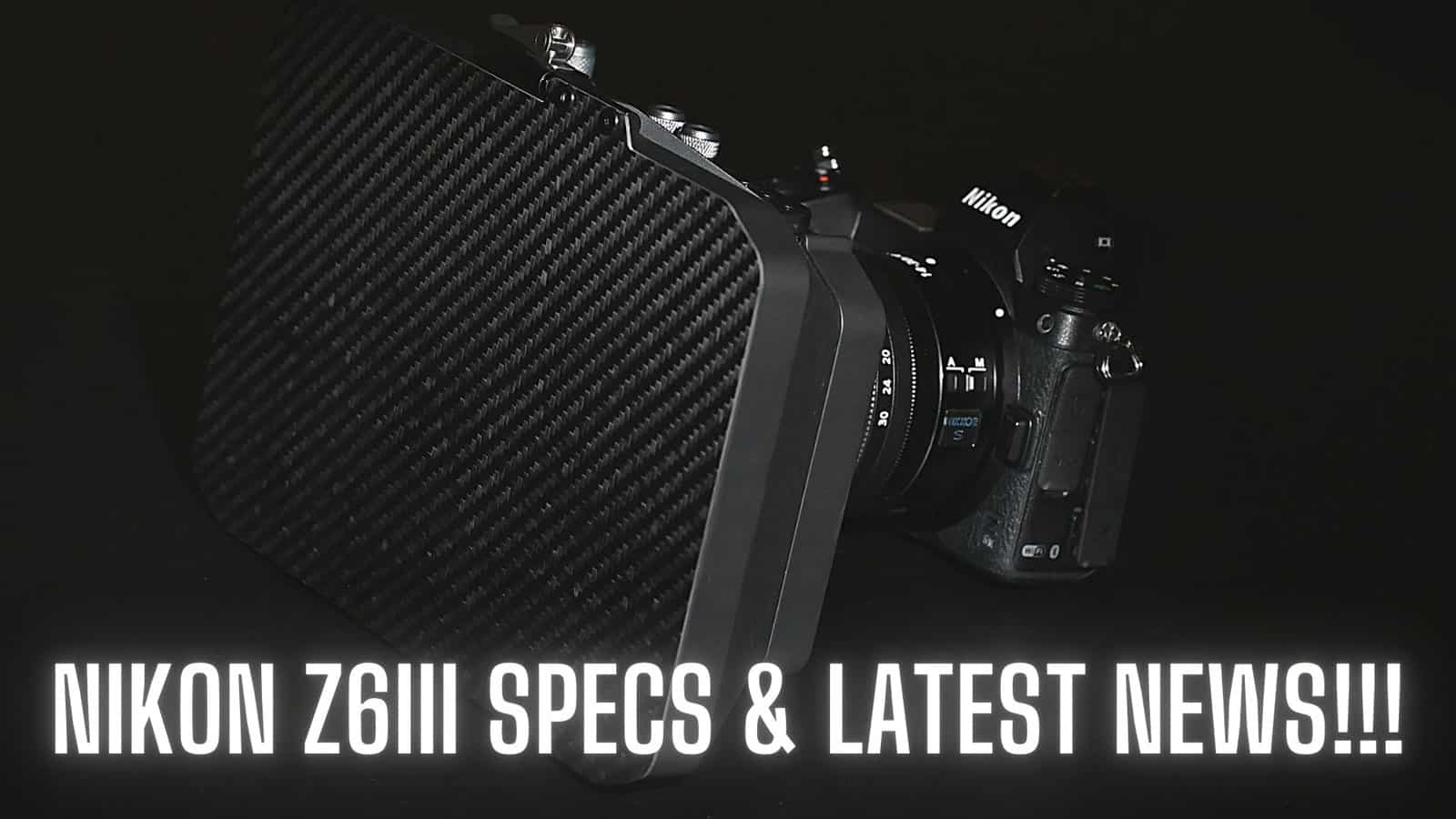 There are loads of rumours out there right now about the launch of the Nikon Z6iii, we have been speculating for months on what specifications it will and won’t have, I originally posted this article on the 14th of August 2022 with my inside info and prediction from people in the know.

I was hearing the Nikon Z6iii would be announced possibly around Late Oct/early November 2022 with a launch date in February to March 2023 at the very earliest.

So why hasn’t that happened already and what went wrong? Was my information completely wrong? Was there ever a product launch planned for Oct/Nov 2022?

Let me start by saying I am lucky enough to have a few contacts in Nikon… Well more outside Nikon than actually inside there but you get the idea, so let me share with you what I have been told over the last 2 to 3 months. Crazily we have been chatting about the Z6iii for nearly 7 months now and these people are seriously in the know about what’s going on.

What went Wrong with the Nikon Z6iii launch?

Well, nothing only it has been delayed and while that’s not good news it could still mean we get a product launch fairly soon. There have been several issues recently for Nikon to deal with… chip shortages being a huge headache and there is also the elephant in the room that nobody wants to talk about… The Nikon vs RED court case over the Z9 RAW recording.
The Z9 is only just now starting to hit demand and surplus stock is now finally sitting on store shelves thankfully.
While the Z9 is a different beast from the Z6iii there are going to be several similarities between them and that’s the key here I am told.
I have been hearing for months now that we may very well get the Z9 RAW recording capabilities in the Z6iii but what does that mean for Nikon and their court date? Is this what’s delaying the product release? If so it would explain why Nikon would want a very short lead time between the announcement and the product launch.
If this is right then it could truly be an utterly massive step forward for the video capabilities of this camera.

I think it’s very important to understand that until the camera is actually officially announced that the specifications are still open to slight change. This is the key here and why I believe we could still see some tweeks to the final product as of yet. I have a full list of the specifications for the Z6iii further down the page.

Since I originally heard the Nikon Z6iii rumours and that there would be an official Z6iii announcement in September or October of 2022 the rumoured specs have changed a bit. My source has been fairly bang on about specs though, the specs have changed slightly since then and even only a few days ago I got a slightly modified spec list again.

Now as time has gone on I have talked to several other people also who have all had completely conflicting reports on the Nikon Z6iii rumours and specifications but none of them seem to have the inside scoop. So I went back to my original source and kept pestering them 🙂

I believe the main reason for this is Nikon are probably putting out different Nikon Z6iii rumours to throw other companies off the scent, think about it do you think Nikon want Sony, Canon Fuji, Panasonic and a few more brands knowing what they are about to launch and when?

Welcome to my 12 Nikon video tips and tricks these are going to really help your videography. These are the tips I wish I knew when starting out in Videography & Cinematography combined with the right setting for your Z6, Z6ii, Z7, Z7ii and in fact all Z series Nikon cameras. So I actually went […]

Nikon Z6 and Z6ii best ISO settings and dual ISO explained It’s possible you could be using the wrong ISO settings on your Nikon Z6 or Z6ii and let me explain why that is… The sensor in both the Z6 and Z6ii are identical hence the same settings apply for both of cameras.  Now, the […]

The SmallRig battery replacement kit that also includes a charger and two batteries… This EN-EL15C Replacement battery Kit is ideal if you own a Nikon camera that takes any of the following batteries EN-EL15A, EN-EL15B or EN-EL15C… Yes that includes the likes of the Nikon Z6, Z6ii, Z7, Z7ii, D850, D810, D750….. To name but a few as […]

Increase your battery capacity and battery life on your Nikon Z6ii or Z6 camera. I was asked last week “how can you keep your camera in power for longer with it costing you a fortune?” Well, I gave the person three different answers and I think two of them were a serious surprise to them. […]

I think it could finally be time to say goodbye to my Nikon D850. Hello Nikon Z8… Before we start… Before I get into this I would just like to say that this isn’t about having the latest gear or photography snobbery this is merely my thoughts on how I could finally be happy with […]

Nikon Z8 or Nikon Z6iii why now and what’s next?

Nikon Z8 or Z6iii are we about to find out what’s next for Nikon? I originally heard about the suspected Nikon Z8 release date or Nikon Z6iii release date being announced by Nikon about two months ago from a source very close to Nikon. As well as what I have been told by a few […]

When can we expect the release of the Nikon Z6iii? one of the hottest questions out there now in Nikon Land… There is no doubt a new camera model announcement is going to happen very soon. The Z6iii announcement is still about 2 months away now I am told which would mean we can expect an announcement in late April/May 2023 with the release date being late in the second quarter of 2023 or third Quarter of 2023.

The expectation here is camera bodies will start hitting shelves around November to December 2023, depending on the order volume of course.

The principle reason for this delay is going to be semiconductor shortages, production line issues and Christmas deliveries consuming factory production time.

The Nikon Z9 has been a very popular camera and getting enough of them out there to meet the demand has certainly been an issue since it was launched. The prediction is the Z8 and Z6iii won’t have as much of an issue here though.

There is a strong rumour out there now that the Z8 could actually hit the shelves as early as September this year if that does happen then the Z6iii could well be out a month or two before Christmas. There are a lot of questions about the viability of doing that though.

Look at the Z-fc, the Z50 and Z30 Nikon seem to be able to produce enough of these bodies to cater for the demand. So their production line certainly has the capacity to produce a lot of product.

Nikon have been churning out some great camera bodies over the last year and it looks like that is only going to get better now. I won’t even start to talk about the jaw dropping lenses they are producing these days.

This bring us to the Z6iii specifications and this is a bit more straight forward than the release date thankfully.

So what can we expect in the Nikon Z6iii?

Resolution as I just said is going to be the deciding factor on how well this camera is received worldwide and while 8K would be amazing I think the option of 6k would be a huge step up from the Z6ii for editing purposes and of course the internal recording and different recording formats could be an absolute game changer for this camera.

Nikon the ball is in your court so the only question that remains now is do you want to hit a homerun or are you going to play it safe???  Go on knock it out of the park, show them all that DSLR is dead and there is now a new Nikon rising from the ashes breathing fire and getting ready to kick ass.

So, when will we know what exactly is going to happen with the Z6iii?

For me I believe once the next camera is announced (Z8) which is supposed to be available in late August / early September we will see what Nikon have done with the Z8 and this will reveal exactly what is happening with the Z6iii.

For now I think all of the above improvements are going to make this camera a serious option for hybrid shooters out there and with the added bonus of the stunning range of Nikon Z lenses too, with third party lens manufacturers now jumping on board we could see the Z mount finally kicking off properly.

If you want to know what is happening with the Z7ii and the Z8 pop on over to my blog post here for a read of it.

Or I have another post up on is the Nikon Z8 the Nikon D850 Killer if you want to have a read of it?

Or if you want to improve your photography then why not going me on one of my photography workshops.

Until then I will see you out there,

My full Luminar Neo Review and is it worth it?